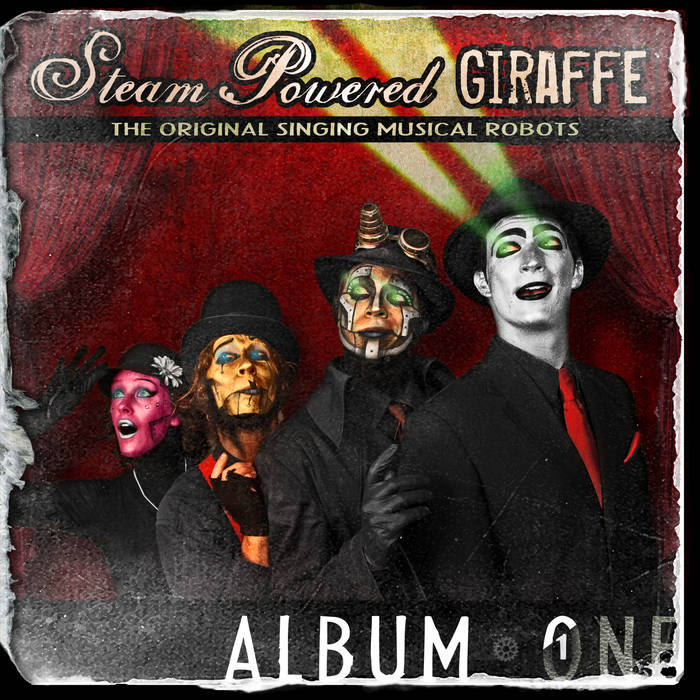 nazmazh There's just an undeniable charm to SPG, and it radiates through all their albums. This one kicks everything off, and starts their style of weaving a narrative into the background of everything. You don't necessarily have to follow along to enjoy their music, but you can get a little extra out if you do. Favorite track: Clockwork Vaudeville (2009 Release).

prime8ofthequagaars I love this band! Their music can cheer me up in just about any situation while some songs can almost have me in tears. They have so much range, both in that sense and vocal range. The Spine and Rabbit seem to be able to hit any note ever imagined. Favorite track: Brass Goggles (2009 Release).

Steam Powered Giraffe's very first album was originally released in 2009. By 2011, founding member Erin Burke (who played the robot Upgrade) had left the band to pursue other opportunities. Since the band only had one album at the time and potential gigs kept asking where the "female robot" was, the band decided to change their album in 2011 to feature just the current robot lineup. This included new cover art, the removal of Erin Burke's octave harmonies, and the replacement of Erin Burke's solo song "I Am Not Alone" with the song "Ice Cream Parade".

This version features the original release of Album One as it was in 2009, with the robot Upgrade, her harmonies, and her song "I Am Not Alone".

If you prefer to hear the 2011 release with all it's changes, we have that version of this album as well, and it is also available for purchase.

Steam Powered Giraffe is a musical project from San Diego, California. It was formed in 2008 by twin siblings David Michael Bennett and Isabella “Bunny” Bennett. Together, along with a cast and crew filled with theatrical backgrounds, the group takes on the guise of singing antique automatons and the fictional robotics company that made them. ... more

Bandcamp Daily  your guide to the world of Bandcamp

Cannibal Corpse's George "Corpsegrinder" Fisher stops by for an interview